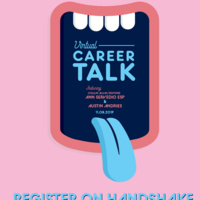 In partnership with Columbia’s Cinema Television and Arts and Alumni Relations departments, please join us for our next career talk welcoming Columbia Alums and Film/Video Editors Annie Esp (Servedio) and Austin Andries.

Instructor Richard Petrizzi will moderate and lead the discussion during his morning TV Career Strategies class and all interested students and alumni are welcome to attend this event at the Career Center.

Space is limited. Please register in advance on Handshake.

More about our guests:

In her 23-year career in TV news she has been awarded with nine Emmys and 29 nominations. ABC7 holds 18 of those years and eight of the Emmy wins…the last win, 2017 with an Investigative Series.

She loves bringing the written word to life and feels blessed with the opportunity to fulfill her passion every day, with every story. She feels you never stop learning in this business, and staying on top of technology is essential because of the speed with which it changes.

Before ABC7, Annie was a news editor for several years at WGN and WTTW. She holds a B.A. in Television Production from Columbia College Chicago (’95). In addition, Annie was also the Senior Equipment Center Manager in the TV Department for several years. She also taught TV news practicum and Vid Tech classes for three years at the college.

Annie feels Columbia gave her amazing opportunities, a fearless ability to learn, and an incredible foundation that her career was built upon.

After abandoning a theater conservatory and graduating with a degree in Cinema Arts & Sciences from Columbia College in Chicago in 2016, Austin is starting to find his groove. In 2016, he was hired as an assistant editor for Flare Studios at Energy BBDO in Chicago, working his way to editor by the summer of 2018, providing editorial and graphics services on social campaigns and optimizations, animatics, Cannes submission videos, pitch and brand sizzle videos, and broadcast spots for clients including Bayer, SC Johnson, MARS/Wrigley, Home Instead, and Luxottica.

Then he got married and said, “toodles,” because he moved to New York City.

In the fall of 2018, he joined the team of NBC Digital’s social media show Stay Tuned, a fully social facing news program reaching over 10 million subscribers. He is editor on their daily Snapchat and Instagram show which delivers a 2-minute news run down twice a day, their short form explainer series on YouTube, and has recently helped helm the launch of the show’s TikTok account, which has grown to over 290k followers with 6.6M likes. Yes, you read that right: TikTok. Finally, his love of Vine has paid off professionally.

If he isn’t editing, you can most likely find Austin posting cooking videos on his Instagram, napping with his two French bulldogs Gerard and Remy, or putting far too much effort into his Halloween costumes. Find him on Instagram @theaustinjayshow, and StayTuned @staytunednbc.

FREE to the Columbia community