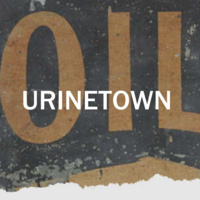 Set in the not-so distant future, a terrible water shortage and 20-year drought has led to a government ban on private toilets and a proliferation of paid public toilets owned solely by The Urine Good Company. If the poor don’t obey the strict laws prohibiting freer urination, they’ll be sent to the dreaded Urinetown. After too long under the heel of the malevolent Caldwell B, Cladwell, the poor stage a revolt, led by a young hero, fighting for the freedom to pee. A brilliant satire modeled off the plays of Kurt Weill and Bertolt Brecht, Urinetown is a wickedly funny, fast paced, and surprisingly intelligent comedic romp.