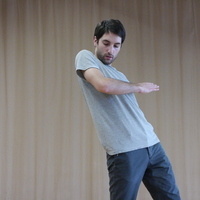 “What begins as an experiment becomes joyous exploration.”—Cultural Weekly

In Movement on Movement, Noé Soulier analyzes and describes different ways to conceive movements. Through analysis, Soulier proposes different ways of focusing one’s attention on a given movement in the body. Words and gestures interact with each other creating correspondences, frictions, and gaps. Using gestures from William Forsythe’s Improvisation Technologies as source material, Soulier investigates the ways in which we talk about movement and the ways in which movement generates discourse.

Born in Paris in 1987, Noé Soulier studied at the National Ballet School of Canada and PARTS in Brussels. He received a master’s degree in philosophy at La Sorbonne University (Paris IV) and took part in Palais de Tokyo’s residency program: Le Pavillon. Noé Soulier is an affiliated artist at the CND Centre national de la danse in Pantin since 2014 and an affiliated artist at CDCN Toulouse / Occitanie from 2016 to 2018.