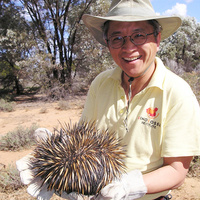 Earliest Mammalian Evolution in the Age of Dinosaurs

Presented by Dr. Zhe-Xi Luo, Professor at the Department of Organismal Biology and Anatomy, The University of Chicago

Mammals originated more than 200 million years ago and two-thirds of their history occurred during the Mesozoic Era when dinosaurs dominated the land. In the Mesozoic Era, stem mammals underwent an enormous morphological evolution and acquired many key biological adaptations of modern mammals. Discoveries of new fossils during the last 20 years, especially the Jurassic fossils from China, have revealed how the earliest mammals acquired the modern mammal-like jaw and complex teeth for effective feeding, a distinctive skull growth pattern of modern mammals related to lactation, a more sophisticated ear for sensitive hearing, and an enlarged brain for sensorimotor function. Early mammals also evolved hairs for tactile sensory function and furs for thermo-regulation for endothermic physiology. Mesozoic mammals developed a spectacular diversity of locomotor functions, from swimming to gliding, which facilitated their ecological diversification. This suggests that long before the extinction dinosaurs, mammals had already developed a significant ecological diversity in the age of dinosaurs.

School of Liberal Arts and Sciences, Science and Mathematics