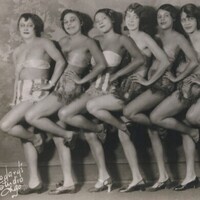 “Say It With Pictures” Then and Now: Chicago’s African American Photographers

The Museum of Contemporary Photography will host art historian Amy Mooney in conversation with the esteemed photography scholar Deborah Willis in an unprecedented reveal of the forgotten work of African American photographers working in Chicago from the 1890s through the 1930s.

As a viable commercial enterprise that was supported through the growing black press, Chicago’s historic contributions have long been overlooked. Considering the work of over 65 studios that were owned and operated by African Americans, Mooney and Willis will discuss the ways that photographs made during that period transformed the visual representation of black America, both within the public realm of popular culture and the private space of the family album. From the glamour shots by Woodard’s Studio to Patton Studio’s documentation of the opening of the George Cleveland Hall Branch of the Chicago Public Library, these images circulated in national publications, significantly contributing to an affirming and celebratory representation of black lives.

The conversation will be followed by a reception at the MoCP and an opportunity to view current exhibitions including The Many Hats of Ralph Arnold: Art, Identity and Politics and Echoes: Reframing Collage.