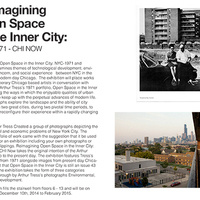 Reimagining Open Space in the Inner City: NYC-1971 and CHI-Now, examines themes of technological development, environmental concern, and social experience between NYC in the 1970’s and modern day Chicago. The exhibition will place works from contemporary Chicago based artists in conversation with images from Arthur Tress’s 1971 portfolio, Open Space in the Inner City, exploring the ways in which the enjoyable qualities of urban life attempt to keep up with the perpetual advances of modern life. The photographs explore the landscape and the ability of city dwellers from two great cities, during two pivotal time periods, to adapt and in reconfigure their experience within a rapidly changing metropolis.

In 1971 Arthur Tress Created a group of photographs depicting the environmental and economic problems of New York City. The resulting portfolio of work came with the suggestion that it be used as the base for an exhibition including your own photographs or newspaper clippings. Reimagining Open Space in the Inner City: NYC 1971 & CHI Now takes the original intention of the Arthur Tress portfolio to the present day. The exhibition features Tress's photographs from 1971 alongside images from present day Chicago to suggest that Open Space in the Inner City is still an issue 43 years later. The exhibition takes the form of three categories brought up through by Arthur Tress's photographs Environmental, Social, and Development. This exhibition fills the stairwell from floors 6 - 13 and will be on display from December 10th, 2014 to February 2015.