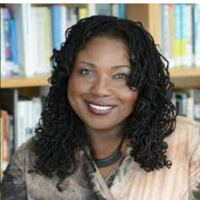 We are so excited to kick off the Fall 2019 Art Now! Lecture Series with a conversation with Tempestt Hazel and Tracie Hall!

Free and open to the public.

Tempestt Hazel is a curator, writer, artist advocate, and director of Sixty Inches From Center, a Chicago-based online arts publication and archiving initiative. She is also the Arts Program Officer for the Field Foundation of Illinois.

In her curatorial practice, Hazel uses archives and collections as a starting point to draw connections between a variety of histories and the work of contemporary artists. With Sixty Inches From Center, she advocates for artist legacy-building through arts journalism, storytelling, and ephemera cataloging while working to increase awareness, content, and accessibility to the Chicago Artist Files of over 10,000 artists, housed at the Harold Washington Library. Over the years she has worked in arts administration, curating, and multidisciplinary programming at Chicago's Department of Cultural Affairs and Special Events (DCASE), Chicago Artists Coalition, Chicago Park District, and Arts + Public Life at the University of Chicago.

Prior to her appointment as Director of the Joyce Foundation’s Culture Program, Tracie D. Hall served as Deputy Commissioner of the Department of Cultural Affairs and Special Events (DCASE) for the City of Chicago, where she oversaw the Arts and Creative Industries Division which included visual arts, performing arts, music industry, and farmers market programs, as well as the Chicago Film Office.

Hall has also served as Vice President of Strategy and Organizational Development at Queens Library in New York City (NYC), one of the nation’s busiest libraries serving over 11 million users annually; at Boeing Company’s Global Corporate Citizenship Division where she worked as Community Investment Strategist for 9 U.S. and 16 non-U.S.  sites, and later as their Chicago Community Investor; as Assistant Dean of Dominican University’s Graduate School of Library and Information Science; as Director of the Office for Diversity at the American Library Association; as visiting professor at Catholic, Southern Connecticut State, and Wesleyan Universities; and in non-profit and public sector posts across the country.

Deeply invested in the intersection of arts access, literacy, youth, and economic development, Hall led the organization and founding of the NYC Early Learning Network; developed the Seattle-based SCRIBES program, which has become a long-running youth creative writing project; conceived and curated the National Endowment for the Humanities (NEH)-funded Festival of Caribbean Literature with the Connecticut Center for the Book; served as author and principal investigator on three milestone Institute of Museum and Library Science (IMLS) initiatives; and in Chicago, has worked on several initiatives connecting art to community and workforce development.

School of Fine and Performing Arts, Art and Art History

Free and open to the public.