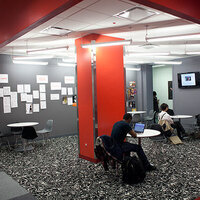 72 E. 11th St. was built in 1929 by Holabird & Root, architects of outstanding Chicago skyscrapers such as the Chicago Board of Trade, the Palmolive Building and the 333 N. Michigan Avenue Building. 72 East 11th Street, a six- story, limestone-clad Art Deco building, was originally owned by the Chicago Women's Club and housed the organization's meeting rooms, offices and a theater. Rich in history, it was the site for rallies in support of women's voting rights, efforts on behalf of compulsory education laws and fund raising for scholarships at the School of the Art Institute of Chicago and a women's dormitory at the University of Chicago. Subsequent owners and uses are unknown. Acquired by Columbia in 1980 as the school's Theater Center, it currently houses a renovated 400-seat theater, classrooms, and space for film and photography studios.