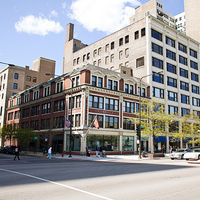 1014-16 S. Michigan Avenue was built in 1912 by Christian A. Eckstorm. A red brick 4-story building with terra cotta detailing, this structure was erected by a developer as a speculative commercial building. During its first 30 years, it housed offices for a shingle distributor, a lumber company and an electrical parts manufacturer. In 1941, the building was rehabilitated for the Sherwood Conservatory of Music, founded in 1895 by William H. Sherwood, a piano virtuoso, teacher and composer.The school's most famous alumna may be the comedienne Phyllis Diller, who was a piano student at the Sherwood School in the 1930s but did not graduate. The building was acquired by Columbia College Chicago in 1997 and now houses the school's music department. The artistic, cultural and performance education tradition of this building, as it was adaptively reused since the 1940s, is continued today in the programs of the Music Department of Columbia College.

Meet The Artist with Woody Goss

Chicago Vox and The Gospel Band: Showcase in...

The Latin Ensemble: Showcase in Concert

The Hip Hop Ensemble and The Pop Rock Ensemble:...