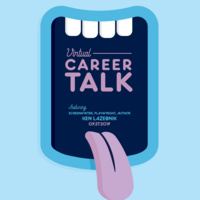 Instructor Richard Petrizzi will moderate and lead the discussion during his Television Career Strategies morning class, but all interested students are welcome to attend this virtual session at the Career Center.

Space is limited. Please register on Handshake in advance.

More about our virtual guest: Ken Lazebnik writes for television, film, and theater. His most recent play, "Autonomy", premiered at Mixed Blood Theater in May 2019. His television writing has ranged from over 20 scripts for "Touched by An Angel", to writing for "Army Wives", "Providence", "Star Trek: Enterprise", and the series "When Calls the Heart" on the Hallmark Channel. With Garrison Keillor, he co-wrote the script for Robert Altman's final film, "Prairie Home Companion". His screenplay for "The Christmas Cottage" starred Peter O'Toole and Marcia Gay Harden. He wrote three PBS specials for their series “In Concert at the White House,” which were filmed in the East Room of the White House. These featured such varied performers as Broadway stars Patti LuPone and Jennifer Holiday, and country star Toby Keith. He is the founding director of the Stephens College MFA in TV and Screenwriting Program, a low residency program based in Hollywood, and the Director of the LIU TV Writers Studio in Brooklyn.

FREE to Columbia students and alumni