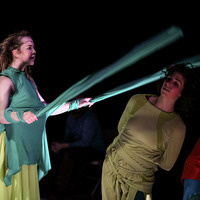 “Read is a master at rhythm.”—Art Intercepts

“Baldwin’s wide ranging imagination and affinity for the surreal lead her down a different path for each new work.”—The New Yorker

Same Planet debuts a new work from Artistic Director Joanna Read and a new commissioned work from choreographer Ivy Baldwin, who is “a bright feature of the ‘downtown’ scene in New York” (The Village Voice). Baldwin’s Ammonite centers on concerns around the steady destruction of the natural world. BAD BUNNY focuses on power, consent, and the many meanings of the word yes.