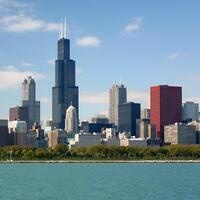 Join us for Creativity and the City, a special presentation by Humanities, History, and Social Sciences Professor Dominic Pacyga, PhD.

What makes creativity possible? How do we define the creative moment? Why are cities so important to the creative act? This illustrated lecture will look at the city as a driving force in creativity.

Artistic and cultural creation does not exist in an economic or social vacuum. The key is the ability to transfer ideas from one medium to another. Jazz, painting, poetry, literature, philosophy, and more all interact with each other. Industrial creativity has also centered on cities. New ways of producing goods and of marketing them have all flourished in the urban milieu.

Scientific concepts have also blossomed in the city. Ancient Athens, Rome, London, Vienna, Paris, New York, Chicago, and Los Angeles have all been places were something new has been born. Cities, with their natural diversity, are hot houses of new ideas, of new approaches. Dominic Pacyga will look at how the city has encouraged the creative spirit over time with a focus on the nineteenth and twentieth century European and American city.

Dr. Pacyga received his PhD in History from the University of Illinois at Chicago in 1981. He has authored and coauthored six books concerning Chicago's history, including Slaughterhouse: Chicago's Union Stock Yard and the World it Made (2015), Chicago: A Biography (2009), Polish Immigrants and Industrial Chicago (1991), Chicago: City of Neighborhoods with Ellen Skerrett (1986), Chicago: A Historical Guide to the Neighborhoods (1979) with Glen Holt, and Chicago's Southeast Side (1998) with Rod Sellers.