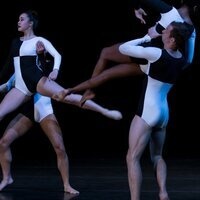 “Spectrum Dance Theater showed us again how contemporary dance, especially when paired with great live music, can be one of the most exciting of art forms.”—The Seattle Times

Bessie Award-winning and Tony-nominated Donald Byrd is “a choreographer with multiple personalities…an unabashed eclectic” (The New York Times). Byrd returns to Chicago for the first time in 24 years with the latest in Spectrum Dance Theater’s popular and critically acclaimed Rambunctious Series, Rambunctious Iteration #3–The Immigrants. Byrd’s athletic and socially conscious choreography “serves up some of the most gorgeous, inventive work I’ve ever seen” (Michael Upchurch, The Seattle Times art critic) in celebration of the contributions of a group of immigrant composers to the American cultural landscape.