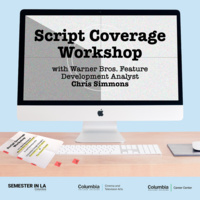 You must register in advance on Handshake to participate in this event.

Artists have portfolios; directors/editors have reels; actors have head shots; and writers/producers entering the entertainment industry are expected to provide script coverage samples. Be ready, if you are applying for a development internship, whether in Chicago, LA or NYC, you will be asked for sample coverage.

Because of the volume of scripts, books, magazine articles, and treatments in Hollywood, production companies, studios, and networks ask interns and entry-level assistants to screen the material. The result is "coverage" - a specifically stylized and structured book report which provides a story synopsis and recommendation whether or not the material should be pursued. One's ability to synopsize, analyze and write effectively is crucial to success.

Chris Simmons of Warner Bros. Entertainment will present and conduct a 2-hour workshop on how to write effective and professional coverage. This interactive virtual workshop requires participation. Upon completion, participants will have the option to cover a Hollywood script and submit their work for review and feedback.

All interested students are invited to participate, with priority given to SiLA-bound students.

Chris Simmons is a senior Feature Development Analyst at Warner Bros. Pictures.  In this position, Chris provides development notes for studio-owned projects, helping to shape material at the scripting level, as well as evaluating screenplays and manuscripts for possible studio acquisition.  He has worked on many prominent WB hits, including the Academy Award-winning JOKER, RICHARD JEWELL and THE MULE. He has also worked as a reader for HBO, New Line Cinema and Icon Productions.

Chris has judged several TV writing competitions, including NBC Universal’s Writers On The Verge, Nickelodeon Writing Program and Will Smith’s Overbrook Productions’ program, among others.  In addition, he is an accomplished animation writer, co-developing the Emmy-nominated action toon series STATIC SHOCK for Warner Bros. Animation, as well as co-writing the Emmy-nominated OUR FRIEND, MARTIN for Fox Animation.