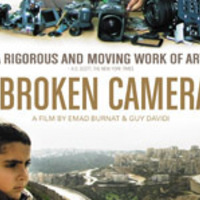 Brief Audience Q&A to follow will be moderated by Iymen Chehade, Columbia College Chicago, Department of Humanities, History and Social Science, lecturer on the Israeli-Palestinian Conflict and the Middle East.

FREE and Open to the Public

Co-Presenters: Ellen Stone Belic Institute for Women and Gender in the Arts and Media, Columbia College Chicago and Jewish Voice for Peace.

An extraordinary work of both cinematic and political activism, 5 Broken Cameras is a deeply personal, first-hand account of non-violent resistance in Bil’in, a West Bank village threatened by encroaching Israeli settlements. Shot almost entirely by Palestinian farmer Emad Burnat, who bought his first camera in 2005 to record the birth of his youngest son, the film was assembled by Burnat and Israeli co-director Guy Davidi. Structured around the violent destruction of each one of Burnat’s cameras, the filmmakers’ collaboration follows one family’s evolution over five years of village turmoil, as olive trees are bulldozed, protests intensify, and lives are lost.

"To me it's not just about making films. I put my life at risk. I was shot at. I was arrested twice. But that was not to make a film or to make money. The film was a way to reach my goal, and that is to tell people the truth about our lives, to tell the story of Palestine." -Emad Burnat, Los Angeles Times

School of Liberal Arts and Sciences