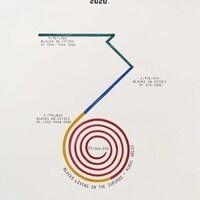 valentine’s interdisciplinary practice is informed by the intuitive strategies of American folk artists and traditional craft techniques and steeped with curiosity for information and how to organize it. In her inquiries, she reveals and interweaves latent stories found within texts, objects, narratives, and spaces. Exhibit of American Negroes, Revisited builds upon her core practice. valentine’s drawings maintain the composition, aesthetic, and areas of inquiry of the originals while revealing patterns, progress, and impasses in the socioeconomic development of Black Americans over the past century.

Along with valentine’s work, this exhibition will present a selection of prints from Du Bois’s initial data visualizations that are housed in the Library of Congress. Exhibit of American Negroes, Revisited examines the illustrations in the context of the 1900 World’s Fair in Paris, where they were first shown, and explores how they have been framed historically and revisited by artists and researchers over time.

This project is partially supported by a grant from the Illinois Arts Council Agency, and Graham Foundation individual artist grant.