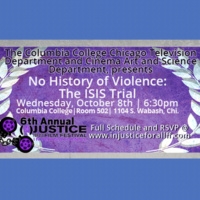 (In)Justice for All Film Festival - No History of Violence: The ISIS Trial

No History of Violence (Directed by Ellie Bernstein & Tracy Nicole Cring) is a documentary about attacks against Somali-Americans since 9/11. It focuses on a Federal case that occurred between 2013 and 2016 in Minneapolis, orchestrated by the FBI and culminating in the trial of 3 young Somali boys, who were accused of material support of terrorism and conspiring to join ISIS. It was the second-largest Federal terrorism case in the United States. It highlights the federal government's targeting and entrapment of Muslims in the United States.