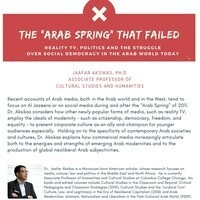 The “Arab Spring” That Failed: Reality TV, Politics and the Struggle Over Social Democracy in the Arab World Today

Recent accounts of Arab media, both in the Arab world and in the West, tend to focus on Al Jazeera or on social media during and after the “Arab Spring” of 2011. Dr. Aksikas considers how other newly popular forms of media, such as reality TV, employ the ideals of modernity - such as citizenship, democracy, freedom, and equality - to present corporate culture as an ally and champion for younger audiences especially.  Holding on to the specificity of contemporary Arab societies and cultures, Dr. Aksikas explains how commercial media increasingly articulate both to the energies and strengths of emerging Arab modernities and to the production of global neoliberal Arab subjectivities.

Jaafar Aksikas is a Moroccan-born American scholar, whose research focuses on media, culture, law and politics in the Middle East and North Africa.  He is currently Associate Professor of Humanities and Cultural Studies at Columbia College Chicago. His books and edited volumes include Cultural Studies in the Classroom and Beyond: Critical Pedagogies and Classroom Strategies (2019), Cultural Studies and the ‘Juridical Turn’: Culture, Law, and Legitimacy in the Era of Neoliberal Capitalism (2016) and Arab Modernities: Islamism, Nationalism and Liberalism in the Post-Colonial Arab World (2009).