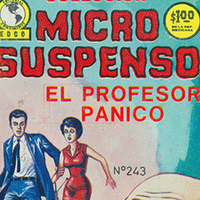 Between Love and Madness: Mexican Comic Art from the 70's and Today

Between Love and Madness: Mexican Comic Art from the 70s and Today introduces the art of the micro-cuentos of Mexico. While popular in Mexico, these small comics, also known as historietas, are little-known internationally. This exhibition presents a selection of works from a collection of ink-on-paper comic drawings originally published in comic books from the late 1960s and early 1970s. Additional works displayed will include original painted cover art and vintage comic books.

The works in this exhibition are selected from Christopher Sperandio’s collection of over 1,300 ink-on-paper drawings and comprise fourteen complete comics published by Editorial Continente. There is much missing from the history of these works—biographies of the creators, copies of the comics in their published form, and in many cases even the publication dates of the comics. A comprehensive academic study of these works has yet to be undertaken. By shining a light on these works, we can honor the commitment of their creators as a search for the full stories of the storytellers gets under way. Until such time, these drawings persist. This exhibition brings the works into view for viewers to love them for the quality of their line and for the complexity of their stories.

Also presented in the exhibition are works by artists Alejandra Espino and Augusto Mora. These artists are part of a new generation of Mexican comic artists who are caring and committed to progressive politics and delicate lines. They are representatives of the new Mexican comic scene, one filled with innovation, nuance, and grace.

Between Love and Madness is organized by Christopher Sperandio, Associate Professor, Department of Visual and Dramatic Arts at Rice University. As an artist, Sperandio feels the responsibility to take care of these comics until more capable custodians can be found.

This exhibition is held in conjunction with Columbia College’s Art & Art History Department and partially supported by a grant from the Illinois Arts Council Agency.  The first iteration of this exhibition was originally organized with the participation of the students of Practical Curation at Rice University.

Alejandra Espino was born in Mexico City in1979. She has a background in art history and visual arts. Comics are her main device vehicle to create stories that explore the possibilities of femininity and the construction and rescue of an alternate history/herstory. She received the Festo/CONACULTA Graphic Novel Award in 2014 and the Poesía en Voz Alta (Poetry Out Loud) Award in 2017 as part of the AA&A collective. She has published her work in anthologies at Editorial Sexto Piso (Mexico) and FLBLB (France) and in solo and collective self-published projects.

Augusto Mora was born in Mexico City in 1984. He is a comic book author who has worked at MAD Magazine Mexico, El Chamuco, and Milenio Diario. His work has been shown in exhibitions such as BDMEX 2014 at Blueberry Festival in Bourgues, France, Paginas vivas at Island Museum at Cozumel, and Where are they taking us to? at Lawndale Art Center in Houston. He has created several graphic novels including El Maizo, la maldición del vástago in 2010, Grito de Victoria in 2013, Fuertes Declaraciones in 2014, Where are they taking us to? in 2015, and Encuentro en la Tormenta in 2018.