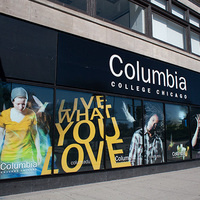 Columbia's main building was built in 1906-07 by Christian A. Eckstorm, an architect popular for his industrial and warehouse designs, to serve as the headquarters of the International Harvester Company. 600 S. Michigan was a modern skyscraper of its era, built with a steel skeleton, high-speed elevators, electric light, the most advanced mechanical systems available and a floor plan designed to maximize natural light for all of its interior office spaces. The 15-story brick-clad building with classical stone detailing has an Art Deco lobby that retains much of its original marble. In 1937 the building was purchased by the Fairbanks-Morse Company, makers of railroad engines, farm equipment and hydraulic systems. It was acquired by Columbia in 1974. In its early years as the home of Columbia, it was adaptively reused to house classrooms, the library, darkrooms, studios, and an auditorium. When the campus expanded through the acquisition of other buildings, especially after 1990, some of these functions, such as the greatly expanded library, were moved to other locations, and the spaces were again adapted for new uses. The building continues to serve as the administrative center of the college, and houses the Museum of Contemporary Photography on its first two floors, along with the 180-seat Ferguson Memorial Theater, photography darkrooms, two professional television studios, film/video editing facilities, and classrooms.