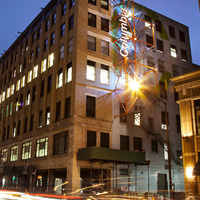 33 E. Ida B. Wells Drive (formerly 33 E. Congress Parkway) was built in 1925-26 by noted Chicago architect, Alfred S. Alschuler, who designed the 1927 Chicago Mercantile Exchange. The seven-story brick and terra cotta building was commissioned by Ferdinand W. Peck, Jr., a real estate developer, and initially housed a bank, offices, and recreation rooms that included dozens of pool tables. A national billiards championship was held here in 1938. By the 1940s, the building was known by the name of its major tenant, the Congress Bank. In the 1980s it became the home of MacCormac College. Columbia College leased space in the building starting in 1997 and purchased the structure in 1999. It currently houses administrative offices, classroom space and the college's radio station.

Women in Audio is hosting a Halloween movie night! We will be watching a thrilling movie that is focused on sound effects and post-production audio! The...